Breakfast cereals or toast are what many people in the UK consider the right thing to start the day with, and cereal manufacturers work hard to make sure that their products are embedded in our food culture.

But there’s a problem with this received wisdom: cereals are made mostly from grains, and grains break down into glucose. Glucose is a sugar, and when the sugar (glucose) we eat arrives in the bloodstream, it has all kinds of effects on the body depending on how efficiently it is dealt with. Straight out of the gate is an effect involving a metabolic hormone. Hormones are powerful substances that trigger different kinds of biological activity, and in the case of glucose, the hormone that is triggered is insulin.

Of course, glucose is one of the main fuel sources that our cells turn to energy, which is why energy drinks are high in the stuff. But somehow glucose needs to first get from the blood into the cells so that it can either be turned into energy straight away or stored for later use. That’s where insulin steps in. Insulin is released from the pancreas in response to blood sugar levels, and like all processes that happen in the body, it’s important to maintain a balance and to have gentle fluctuations in glucose and insulin rather than wild ones!

Having a breakfast that consists more of protein and healthy fats rather than carbs, especially refined, processed carbs, is a good way to keep those fluctuations on an even keel, since it’s the carbs – the sugars – in your diet that produce the biggest spikes. Fat, on the other hand, produces the smallest spikes, and protein is in the middle of the two. A large spike in glucose requires a large influx of insulin from the pancreas to make sure that the glucose is put away into the cells for energy or fat storage. One of the biggest downsides of having a very carb-focused diet is that your cells become less responsive to insulin over time, meaning that the pancreas has to send out more and more insulin to have the same effect of opening the cells to let the glucose in. This is known as “insulin resistance”, the result of which is excessive glucose hanging around in the blood for too long and causing damage to your cells. Yes, sugar is not only bad for your teeth, but also for your cells if it’s not dealt with properly! Insulin resistance is implicated in chronic conditions like obesity, type two diabetes, cardiovascular disease, and non-alcoholic fatty liver disease.

It’s been shown in studies that people who eat refined carbohydrates for breakfast (toast, cereals, pastries, orange juice etc.) actually eat more calories during the rest of the day than those who eat protein and fats with some low-glycaemic vegetables. This is because the bigger peaks in blood sugar levels associated with refined carbs also mean bigger dips, and therefore more hunger.

It’s one thing to avoid eating certain foods, but another to know what to replace them with. I always work with my clients to find what alternatives work for them, and tailor my suggestions and recipes to their needs. For instance, some people may need to avoid large amounts of saturated fats while we work on their gut microbiome balance, or they may need to avoid certain foods that they are sensitive to or that cause bloating for them. With others, we may be focusing on improving bowel regularity and tackling constipation, or encouraging gentle detoxification. With that said, here are a few non-personalised ideas to choose from: 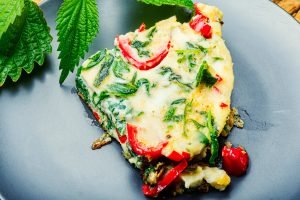 2 eggs, whisked
1/2 an onion (omit if this causes bloating or digestive discomfort)
10g butter
A handful of rocket, spinach and/or watercress, ripped into smaller pieces
Half a red bell pepper or pointed pepper, sliced
Two fresh tomatoes or four cherry tomatoes – naturally ripened if possible, for best flavour and nutrients
A two-inch piece of courgette, halved and thinly sliced
3 mushrooms, sliced
A cupful of fresh flat-leaved parsley, chopped
A pinch of sea salt or Himalayan, and freshly ground black pepper

Gently fry the onion in the butter on a low heat until soft, then add the pepper, courgette, mushrooms and tomatoes until softened also. Now add the eggs to the mixture, followed by the rocket/spinach/watercress and parsley, and move around gently in the pan with a spatula as the egg mixture cooks (a bit like cooking scrambled egg), so that eventually the egg is evenly cooked throughout (no turning necessary). Serve immediately and enjoy!

About the Author: Angela Henderson